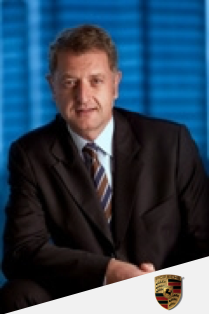 Building a community of Porsche loyalists

Detlev von Platen is President and CEO of Porsche Cars North America, Inc. (PCNA), based in Atlanta, GA, the importer of Porsche sports cars and Cayenne sport utility vehicles for the United States. He assumed his position at Porsche Cars North America on April 1, 2008 as its President and CEO. As President, he oversees responsibility for the import and distribution of Porsche cars in the United States through the retail operations of some 200 U.S. dealers.

Detlev von Platen is married and has four children. He has numerous hobbies and interests, among his most passionate is being a small aircraft pilot. He further enjoys rugby as a spectator and takes pleasure in running and diving as well as other outdoor sports.